Home » What is ginger good for? 11 Health benefits, nutrition, and more

What is ginger good for? 11 Health benefits, nutrition, and more

Ginger is a plant with yellow flowers that grows in the warm parts of the world like Asia, China, India, and Japan. Known for its distinctive flavour and health benefits, ginger is commonly added to recipes. You can obtain ginger in its fresh, dried, powdered, or juice form. Many people mostly use the underground part of the stem for cooking which is known as the rhizome or ginger root.

There are many ways to prepare ginger, including fresh, dried, pickled, preserved, crystallized, candied, and powdered or ground. The flavour is a little peppery and slightly sweet, with a strong and spicy aroma.

Overall, ginger has been used in food and supplements as it possesses powerful antioxidants and natural compounds that provide incredible medicinal uses. Since ancient times, ginger has been grounded and juiced into a tonic to help people with digestion, infections, and inflammation [1].

However, current studies show ginger and its extract to provide numerous other health benefits.

In this post, we will take a look at the 11 health benefits of ginger.

This commonly used spice contains approximately 50% carbohydrate, 6-8% fats, and 9% protein. In addition, it also contains plenty of vitamins and minerals and various powerful antioxidants, and natural compounds. Ginger is very low in calories, low in sodium, and cholesterol and saturated fat-free. 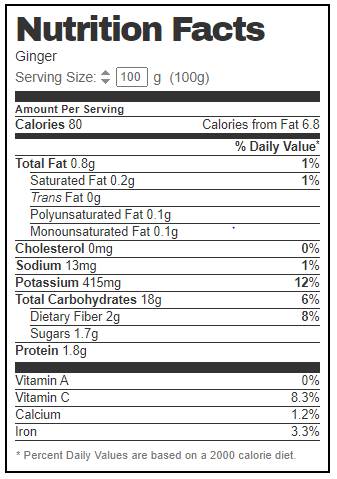 One of the major causes of pain is due to inflammation (swelling). This is the body’s natural self-defense system that protects the cells and tissues from a variety of harmful bacterias and infections.

Plenty of studies show that ginger possesses anti-inflammatory properties. For instance, one of the studies shows that people who exercise regularly and consume 2g of raw ginger per day experienced less muscle and joint pain than people who didn’t [2].

In addition, this study also reported that people had a better range of motion at their joints thanks to the reduction in inflammation.

One of the main causes of inflammation and pain is oxidative stress which leads to cell damage. This may later lead to osteoarthritis and rheumatism.

Plenty of studies show that ginger contains powerful antioxidants like gingerol which reduces inflammation. In general, gingerol is the active compound in ginger that offers its medicinal properties.

Rheumatoid is an auto-immune system in which the body attacks healthy cells and damages them as it mistakes them for harmful bacteria. Some studies show that ginger can be great for reducing inflammation, painful symptoms and being a great addition to the treatment [3] [4].

In addition, the extract has shown to be effective for reducing inflammation and pain in persons who struggle with osteoarthritis [4].

Ginger root contains the most antioxidant properties which has the power to reduce the risks of oxidative stress and fight against a number of diseases and infections. Many studies indicate that the compounds found in the root scavenge harmful bacteria and toxins and eliminate them from the body which stops them from damaging cells [5].

In the traditional use of ginger, nausea and vomiting are among its most common and most well-established benefits. It relieves liver and digestion discomfort which plays an effective role as an antiemetic.

A 2017 study reported that people on chemotherapy treatment experienced less fatigue, nausea and vomiting related to the treatment [6]. In addition, this spice has also been effective for reducing pregnancy-related nausea too [7]. May protect against certain types of cancer

Over the last several years, ginger has been studied for its cancer-preventative and potential cancer therapeutic properties.

Some studies show that natural antioxidants encourage the body to kill and recycle damaged cells, and replace them with new and healthy ones. As a result, the risk of cancer can be significantly reduced [8].

Some early research shows that ginger may reduce the pain severity of migraines and faster recovery [9]. This is thanks to the anti-inflammatory properties of the spice.

May help you manage your weight better

A 2016 study shows that consuming 2g of ginger per day over 12 weeks can significantly help with weight loss [10].

In addition, other studies show that ginger extract can act as an appetite suppressant which can help you lower your overall calorie intake. The same study also reported that participants experienced a faster metabolism which is a significant factor in weight management [11].

If you’d like to lose weight and become healthy, take a look at the Nutrition2change Academy weight management and nutrition course which has been examined and certified by NASM, AAFA, and CPD.

May help manage with diabetes treatment

In addition, a 2013 study shows that ginger can also improve tissue sensitivity to insulin. This allows the body to regulate blood sugar levels better too [13].

Although studies are still controversial, and more research needs to be done, some studies show incredible effects.

For instance, a 2019 study shows that consuming this spice on a regular basis can speed up gastric emptying. Doctors believe that one of the major causes of indigestion is delayed gastric emptying, hence why ginger may help [14].

Some early research shows that ginger may be used as a therapeutic treatment for heavy menstrual cycles. A 2014 study reported a significant reduction in blood flow when people consumed 250 mg of powdered ginger [15].

Reduces the risk of heart disease

Plenty of research shows that ginger and its natural compounds have the power to reduce and regulate these three factors. In turn, this results in a significantly lower risk of heart disease [17] [18].

In summary, ginger and its natural antioxidants and compounds contain an abundance of health benefits. Overall, taking ginger in different forms (whichever is more convenient for you) has the potential to reduce the risk of cardiovascular disease, type 2 diabetes, inflammation, infections, and so much more.

Did you enjoy today’s post? Be sure to subscribe below to get notified when new posts are uploaded, get nutrition and exercise tips, and exclusive discounts!

Healthy Living: 6 tips to Get Started on a Healthy Lifestyle

There are many different aspects of how to live a healthy lifestyle. Staying hydrated, getting enough sleep, and eating well are just some of the

How to get rid of those annoying “last 5” pounds

There are lots of different ways to lose weight, but if you’re looking to get rid of those last 5 pounds, you may need to

What is the difference between ARFID and picky eating?

A lot of people are familiar with picky eating, or Restrictive Food Intake Disorder (R-FID), but don’t know what ARFID is. If you’re not sure

Sign up for my newsletter to see new photos, tips, and blog posts. Do not worry, we will never spam you.